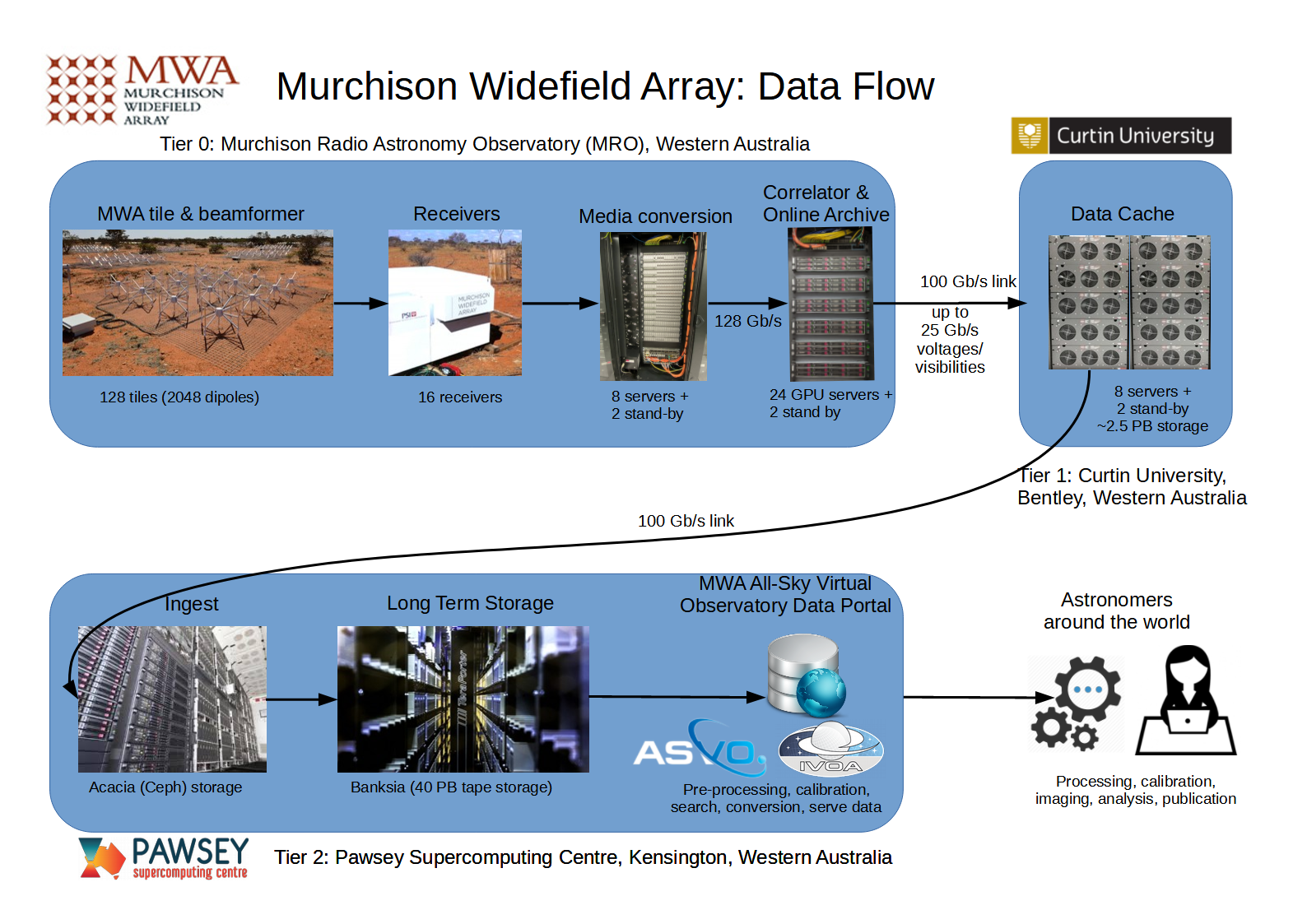 MWAX is located on site at the MRO and comprises 24 new servers (+ 2 spares) and repurposes 10 existing on site servers.  Together the equipment occupies three racks.  Output visibilities are transferred to Curtin, and ultimately Pawsey, via existing fibre-optic links.

This configuration is capable of simultaneous fine channelisation, cross-correlation, frequency/time averaging, and buffer storage for up to 256 tiles and up to 24 coarse channels of 1.28 MHz each. At the time of writing, the MWA has 16 receivers, which process 128 tiles in total. This limits the inputs to MWAX such that it currently correlates only 128 tiles.

MWAX employs the “FX” correlation architecture where the input time samples for each signal path (antenna and polarization) are fine-channelized prior to cross-correlation, reducing the correlation process to complex multiplications in the frequency domain.  Whereas the legacy correlator utilized a polyphase filterbank for the F-engine, the MWAX correlator employs the FFT.  For the X-engine, development time/cost was minimized by utilizing the existing open-source GPU correlator library “xGPU” (the same library at the heart of the legacy correlator).  The standard xGPU library is used essentially unchanged for MWAX, with the exception of a small but crucial change to improve speed and reduce bus/memory traffic, found to be essential to making the design scalable to 256T and beyond (see MWAX xGPU on github).

The 24 coarse channels are processed by 24 GPU-accelerated compute nodes referred to as “MWAX Servers”, with two hot spares.  The real-time data flows on the MWAX Servers are managed through the use of input and output ring buffers that decouple its computational workflow from the input source and output destinations.  These ring buffers are established and accessed using the open-source ring buffer library “PSRDADA”.

MWAX has been designed such that the exact same code used for real-time operation on the dedicated MWAX Servers at the MRO can also be installed on compute nodes with lower specification GPUs (e.g. Pawsey) to provide an offline mode, operating below real-time speed. Note: The modes available to the offline correlator depend heavily on the server and GPU hardware it is executed on. See: MWAX Offline Correlator

The output visibility modes of MWAX for 128 tiles that run real-time on the as-built MWAX hardware configuration are listed at this page: MWAX Modes 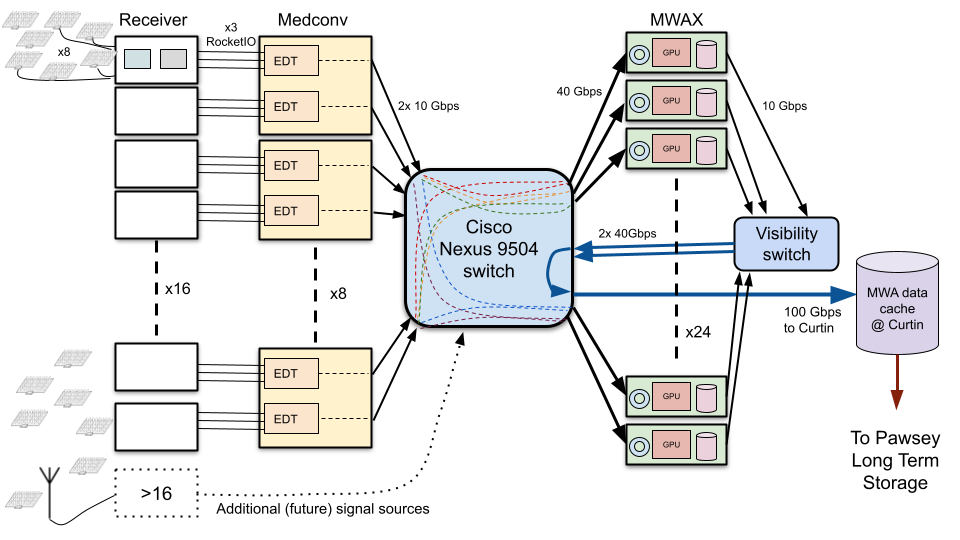 Each of the MWA's existing 16 receivers in the field send 8 tiles worth of 24 coarse channels over 48 fibre optic cables using the Xilinx RocketIO protocol. The fibre optic cables terminate in the MRO Control Building, where two bundles of three fibres connect to a media conversion (medconv) server via custom Xilininx FPGA cards. Six independent processes on each medconv server convert the RocketIO data into Ethernet UDP packets which are sent out to our Cisco Nexus 9504 switch as multicast data where each coarse channel is assigned a multicast address. This provides the "corner-turn" where each of the 6 processes on each mediaconv server is sending one third of the coarse channels for one sixteenth of the tiles in the array.

This section describes the data flow within the MWAX correlator servers. The function and data flow between components is shown in the below diagram:

As per standard IP multicast, any device on the voltage network can “join” the multicast for one or more coarse channels and a copy of the relevant stream will be passed to them.

For MWAX, an array of 24 (+2 spare) identically configured MWAX Servers are connected to the core Cisco 9504 switch (on site at the MRO) via 40 Gb Ethernet.  Each MWAX Server is responsible for one coarse channel of bandwidth 1.28 MHz.  For a 256T array, the input data volume is approximately 11 Gbps per coarse channel.

Packets from the multicast stream are assembled in shared memory (RAM) into 8 second blocks of high time resolution voltage data based on their time and source (known as a “sub-observation”).  At the completion of each 8 second block, the RAM file is closed and made available to another process.  Depending on the current observing mode, the block may be:

A 256T sub-observation buffer for one coarse channel, for the 8 seconds is approximately 11 GB in size.

The MWAX correlator FX Engine is implemented as a PSRDADA client; a single process that reads/writes from/to the input/output ring buffers, while working in a closely coupled manner with a single GPU device - which can be any standard NVIDIA/CUDA-based GPU card.

The figure below shows the processing stages and data flows within the MWAX correlator FX Engine process.

Each 50 ms data block consists of 64,000 time samples for each signal path presented at the input (number of tiles x 2 polarizations).  The 256T correlator configuration supports up to 512 signal paths.  Input data is transferred to GPU memory and promoted from 8-bit integers to 32-bit floats.  The 64,000 time samples of each path are partitioned into 10 blocks of 6,400 samples (5 ms), each of which is FFT’d on the GPU using “cuFFT”, resulting in 10 time samples on each of 6,400 ultrafine channels of resolution 200 Hz.

The design supports a future option to apply delays to each signal path to point the telescope to a specified correlation pointing centre.  When that mode becomes available, it will involve the integer sample component of the required delays being applied using whole-sample shifts as the sub-observation file is assembled, with the residual fractional delays being applied within the FX Engine.  The required fractional delay values for each signal path are passed to the FX Engine via the prepended metadata block written to the input ring buffer.  Delays are applied by multiplying the frequency-domain samples of each sub-block by a phase gradient, whose complex gain values are taken from a pre-computed look-up table to increase speed.  Delay corrections can be static over the entire sub-observation (e.g. to eliminate fixed cable delays) or dynamic over the sub-obervation (with a 5 ms resolution) to implement fringe stopping, i.e. to keep the correlation pointing centre on a fixed RA/Dec.

The FFT’d data is then transposed to place it in the order that xGPU requires (slowest-to-fastest changing): [time][channel][tile][polarization].  As the data is re-ordered, it is written directly into xGPU’s input holding buffer in GPU memory.  The data from five 50 ms blocks is aggregated in this buffer, corresponding to an xGPU “gulp size” of 250 ms.  The minimum integration time is one gulp, i.e. 250 ms.  The integration time can be any multiple of 250 ms for which there are an integer number of gulps over the full 8 second sub-observation.

xGPU places the computed visibilities for each baseline, with 200 Hz resolution (6,400 channels), in GPU memory.  A GPU function then performs channel averaging according to the “fscrunch” factor specified in the PSRDADA header, reducing the number of output channels to (6400/fscrunch), each of width (200*fscrunch) Hz.  For example, with fscrunch = 50, there will be 128 output visibility channels of 10 kHz each.

The channel averaging process involves the summation of the complex visibility values for all the ultrafine channels comprising each output fine channel.  That is, each output visibility channel is formed by the sum of fscrunch complex values.  Note that for the centre output fine channel, the centre (DC) ultrafine channel is excluded from the summation to remove any DC component present in the coarse channel, and the output value is re-scaled accordingly to maintain a consistent output magnitude with other channels.  Only 200 Hz of bandwidth is lost in this process, rather than a complete output channel (as was the case with the legacy correlator where an entire 10 kHz was lost).

During the channel averaging process, each visibility has a multiplicative weight applied to normalise the magnitude of output visibilities to a desired absolute scale.  This normalisation factor is automatically adjusted according to the selected integration time and fscrunch factor such that output visibility values remain at a consistent magnitude.  In future, this normalisation factor will be able to be optionally combined with additional baseline-specific weighting factors based on the input data occupancy, i.e. taking account of any input data blocks that were missing due to lost UDP packets or pre-correlation RFI excision (a potential future enhancement).  The weighting factors applied to each baseline (which are common to all fine channels of that baseline) are placed in the output ring buffer along with the visibility values themselves.  This allows downstream processes to track what weightings were applied.  At present no visibility weightings are applied and the output weight values are all set to 1.0.

The averaged output channel data is transferred back to host memory where it is re-ordered before writing to the output ring buffer.

xGPU utilizes a particuar data ordering that is optimized for execution speed.  The visibility set is re-ordered by the CPU into a more intuitive triangular order: [time][baseline][channel][polarization].  See: MWAX Visibility File Format

The re-ordered visibility sets (one per integration time) are then written to the output ring buffer.

An archiving process (mwax_mover), running on each MWAX Server, watches the directories to which the data capture software writes the output visibility FITS files, as well as the directory to which the voltage data is written, and adds these files to a queue.

mwax mover iterates through each file in the queue, computes a checksum, then creates a record in the MWA metadata database for each file. mwax_mover then attempts to transfer the files to an MWAcache Server at the Curtin 206 data centre via the MRO-to-Perth 100 Gbps link. The transfer is performed using xrootd, a high performance, reliable and scalable file transfer protocol.  In the event that the 100 Gbps link to the Curtin 206 data centre is down, or there are issues with the MWAcache Servers, the mwax_mover process will requeue the files and attempt to transfer them when the systems or link are back online.

There are 10 MWAcache Servers (8 in use, with 2 spares) and each MWAcache Server receives 3 coarse channels (one each from 3 different MWAX Servers). The MWAcache Servers each run an instance of xrootd to facilitate reliable, high-speed transfer from the MWAX servers.

The mwax_mover instance running on each MWAcache Server at Curtin University is configured to automatically forward all visibility and voltage files to the Pawsey Front-End (FE) Servers, where the data are stored in Pawsey’s hierarchical storage management system (HSM). mwax_mover updates the MWA metadata database to tag the files as being safely archived at Pawsey.

In the event that there is an issue with the systems at Pawsey (e.g. monthly maintenance or any other system error), or the 100 Gbps link between the Curtin 206 data centre and Pawsey is down, mwax_mover will requeue the transfer and try again at a later time. Each MWAcache Server has approximately 250 TB of usable storage space to store visibilities and voltage data temporarily until it can be successfully archived.

Researchers will be able to access visibilities and voltages using the existing MWA All-Sky Virtual Observatory data portal (MWA ASVO), where users will either download and process the raw data themselves (especially in the case of voltage data) or they may opt to have the MWA ASVO convert the data to CASA measurement set or uvfits format (with or without applying calibration solutions), averaging, etc.