The 32 Tile (32T) array was the precursor or prototype to MWA 128T. It was deployed and tested throughout 2009 and 2010 at the Murchison Radio Observatory. The 32 Tile array provided an end-to-end proof-of-concept demonstration of the hardware and a limited software chain, an early experience with instrument and data, early science capability, PR value, and also acted as a risk mitigation exercise.

The science outcomes from the 32T array included observations of the solar type III bursts, and a coarse GSM.

Each tile has 16 crossed dipoles and low‐noise amplifiers, mounted in a 4x4 grid on 5x5m ground screens. The receivers digitize the baseband, apply a polyphase filter to generate 24 1.28‐MHz coarse channels for each polarization, and pass these via fiber to the correlator, which generates 768 40‐kHz fine channels for 496 baselines. Four data acquisition servers equipped with GPUs run the streaming real‐time system (RTS), which processes UDP packets from the correlator. Additional site hardware includes a monitor & control (M&C) computer, an NTP server locked to GPS, network gateway and 1‐gE hardware, and 20 TB of internal and external removable storage. As of the end of site trip 11 (X11), operation of this configuration is routine (including via satellite link), with good levels of reliability for astronomy and commonly used engineering modes. The maximum 32T baseline is ~343m and the maximum distance of a tile from a node is ~170m. 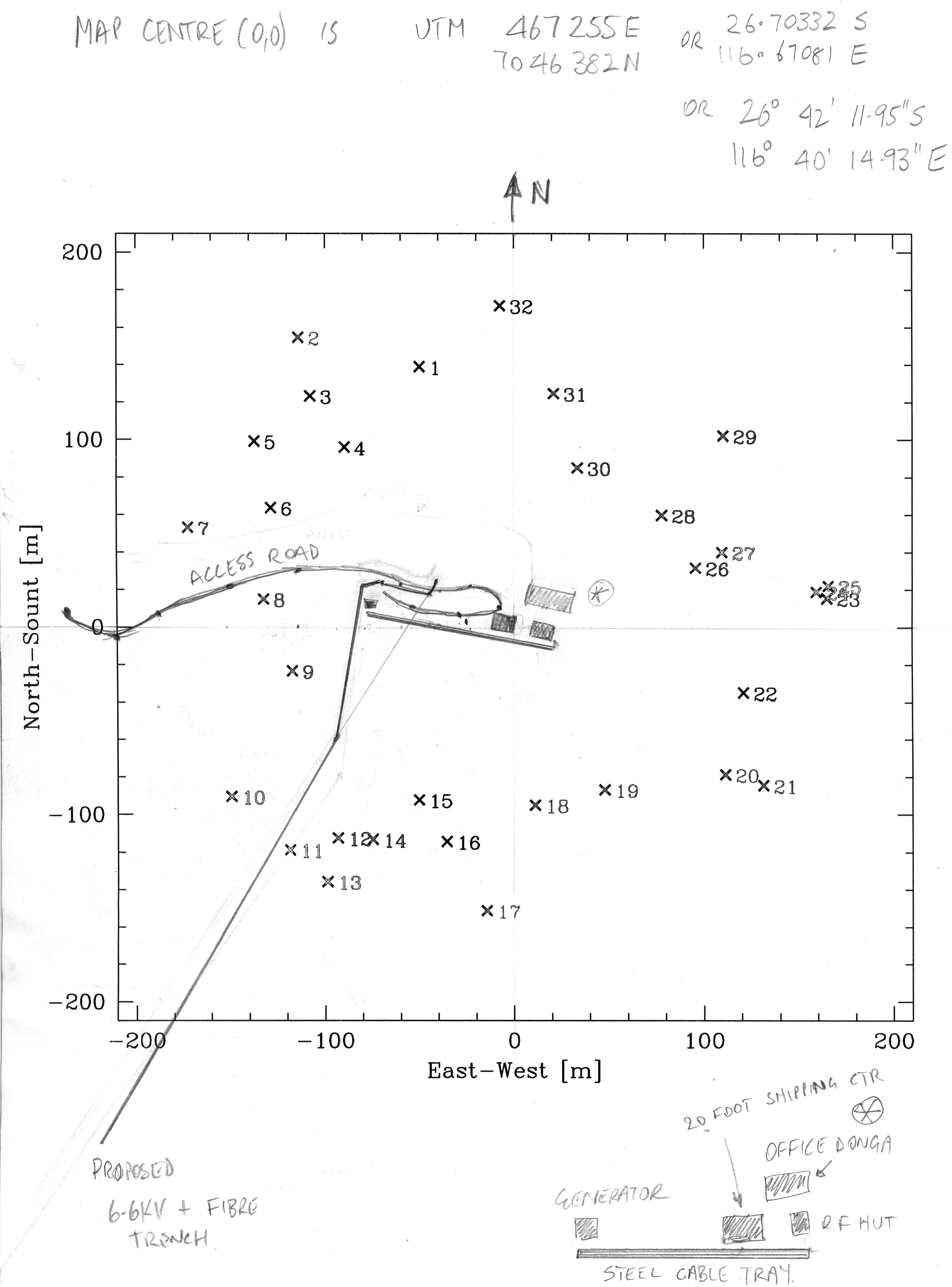 The Phase 1 MWA is a low frequency (80 – 300 MHz) interferometric radio telescope that uses 128 novel aperture array ‘tiles’ made of fixed dipole antennas and no moving parts to achieve massive imaged fields of view (610 sq. deg. at 150 MHz); reasonably high angular resolution (2 arcmin at 150 MHz); high performance imaging (due to a “large‐N” architecture: N=128); and exquisite surface brightness sensitivity (due to a large number of short baselines).

Phase 1 MWA construction was completed in December 2012, engineering and science commissioning was complete by July 2013, and full science operations commenced in August 2013.  Operations have proceeded continuously since then, with over 8 petabytes of data collected and stored at the Pawsey supercomputer facility in Perth.

The MWA is centred on 26°42'11.0"S, 116°40'13.42"E and has tiles located up to 4000m from the centre of the array. MWA tiles are connected to the MRO control building via a combination of surface-installed and buried signal transport infrastructure. 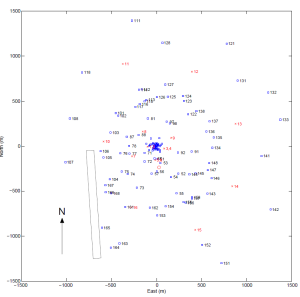 Note that only 128 tiles are available for correlation at any time during MWA Phase II.

The surveyed coordinates of the different array configurations can be found here (note the multiple pages within the spreadsheet): MWA Tile Coordinates.xlsx

Phase 2 MWA added two maximum redundancy ‘hexagon’ sub-arrays to the Phase 1 antenna distribution for an order of magnitude better sensitivity in support of Epoch of Reionisation experiments; and a distribution of antennas that double the maximum baseline length of the Phase 1 array, for order of magnitude better high-resolution imaging applications and all-sky surveys. Phase 2a’s ‘compact configuration’ construction and commissioning was completed in August 2016, and full science operations commenced in September 2016.

The signal processing, electrical power, and data transport infrastructure of the Phase 1 MWA was specified to accommodate future expansion in the number of antennas.  Thus, no changes to the existing signal path were required to realize the Phase 2 MWA. 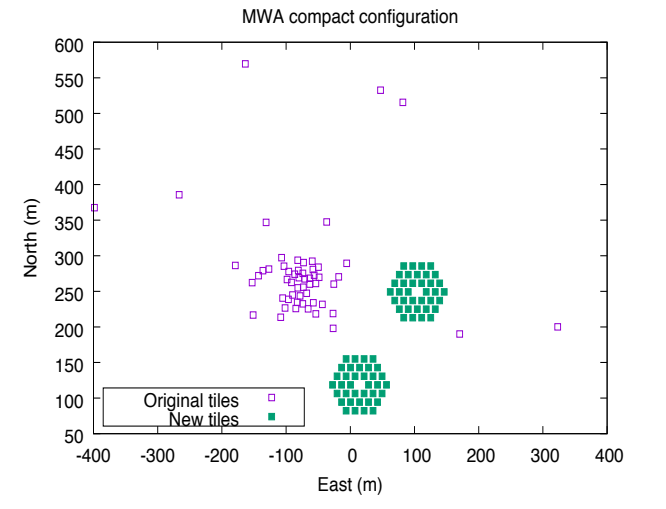 Construction and commissioning of the ‘long baseline’ Phase 2b configuration was complete in September 2017, signalling the beginning of extended array observations in October 2017.

Phase 2b required 52 new tiles, located at distances in excess of 500m from any receiver. The 48VDC power to run each tile's beamformer is provided by solar panels and battery backups at these tiles, and signals are sent back to receivers over optical fibre instead of coaxial cable. This led to the development of two separate sub-systems: a Beam-former Interface (BFIF), to act as a means of communication between the beamformer of a remote tile and its associated receiver, using an RF over fibre (RFoF) link instead of coaxial cable, and a Solar Power Interface Unit (SPIU). The SPIU powers the BFIF and beamformer, using off-the-shelf solar panels and batteries for energy storage. 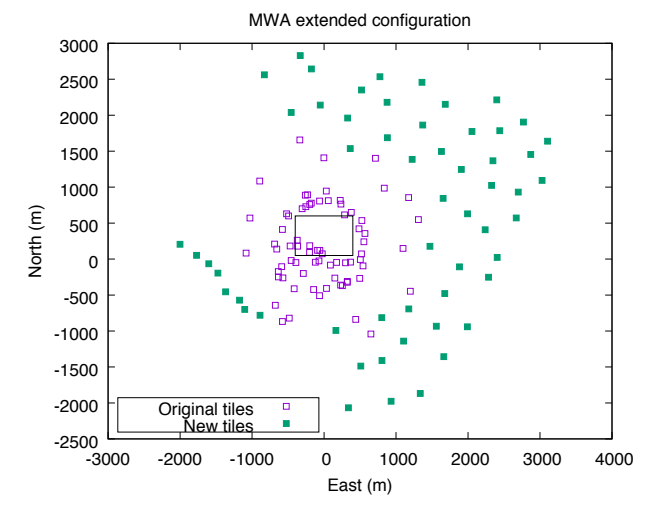 With an upgraded signal path (including digital receivers and a new correlator), it will be possible to ingest data from all Phase 1 and Phase 2 tiles at once. 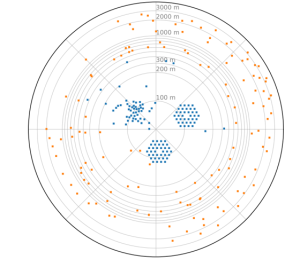